So what DID I do on my summer vacation?

I was overjoyed to be allowed behind the locked doors of the Calgary Stampede Sewing Room!

With two costume designers and over a dozen volunteer staff, the Calgary Stampede Sewing Room builds costumes and does fittings for The Young Canadians, who for over 50 years have been performing in the Grandstand Show at the Calgary Stampede every July, with additional performances throughout the year – such as their Spring Show and the Christmas Show.

The Young Canadians School of Performing Arts holds auditions every August and once accepted, performers receive tuition free training in musical theatre, dance, voice and other performing arts, funded by the Calgary Stampede Foundation and the Grandstand Show’s sponsor, TransAlta.  Many students go on to successful careers in the performing arts.

But let’s get back to the start, the Sewing Room!  It is a large and cluttered space, jammed with over 80,000 costumes and 700 bins of accessories.  Each year 9,000 items of clothing make up 2,500 costumes for The Young Canadians’ shows.

Enough talk… Let’s click on the first image to start the show (with running commentary from me, of course!)

Here we are! (I’m the one sitting at the serger.) 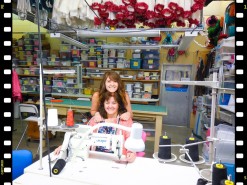 Okay, here’s a cutesy shot at the sewing machine!

Seriously now, it’s time to get to work!

I feel surrounded, and I am not even in the cluttered part of the room! 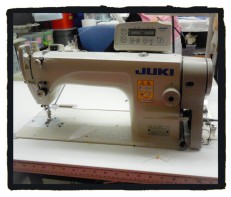 Getting down to business… A heavy duty Juki sewing machine.

… and a Juki serger. Their sewing tables were fantastic – wish I could have snuck one home on the plane with me! (Although I had enough trouble getting my wrists on the plane – long story.)

Loaner machines, for that extra help!

View of the width of the sewing room – I told you it was large – proper cutting table, sewing machine and serger tables and the pressing table … 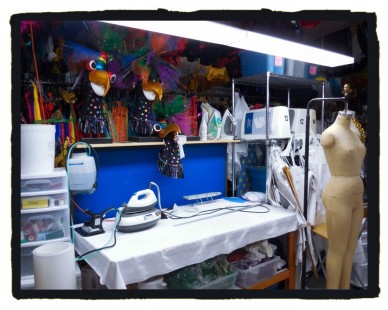 … which is a good size. Also … everything you need is right here! 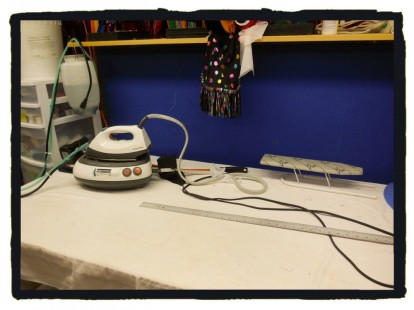 hmm … something I should put on my Christmas list – a proper Steam Generator Iron!

Can you imagine being watched by these critters while pressing open costume seams?

Now we are looking back to the sewing/serger tables and the cutting table.

Computer generated plans and patterns for future costumes on the wall.

… and MORE BINS of supplies… 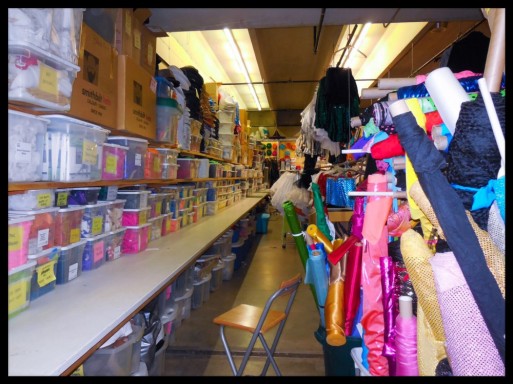 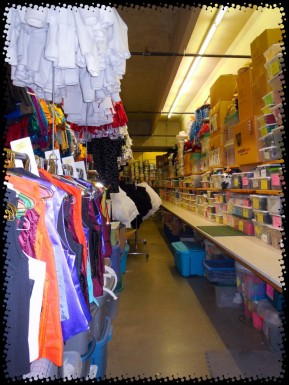 … and again MORE BINS of supplies running the length of the other wall! Anyone need any elastic? It’s a wonder there is anything left in the store!! 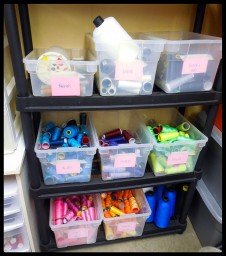 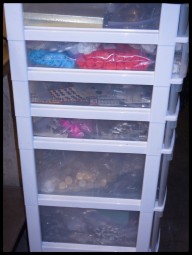 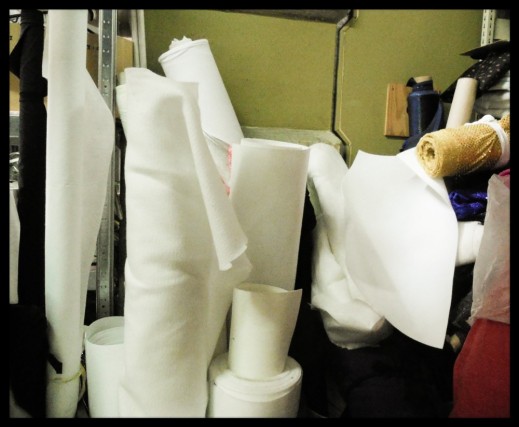 You know I am forever forgetting to buy interfacing… wouldn’t have to worry about that here! 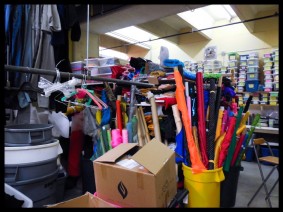 … and yet MORE FABRIC! All bright colours, anxiously waiting to get on the stage! 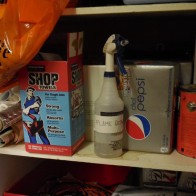 Now who wouldn’t want to be sprayed with “flame retardant” when fully clad in polyester?

It’s not a Calgary Stampede without a few cowboy hats! 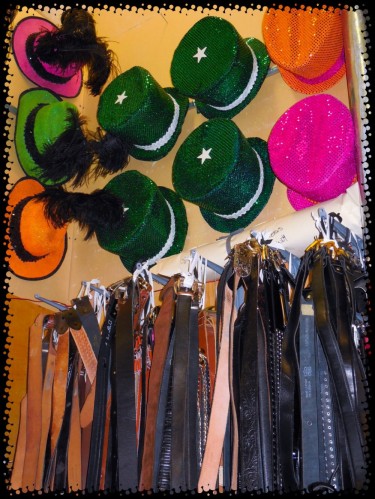 Floor to ceiling – boas, masks, gloves … and gauntlets??? (I would have loved to have seen THAT show!)

Need a Red Hard Hat anyone?

Ah, now we get into the Christmas stuff. Are you lost yet? (I was!)

“Leather” and “sheep skin” chaps. Apparently chaps are used to protect the legs from thorny bushes, animals’ horns, etc. They also help you stay on the horse. (Although NOTHING helps me stay on a horse!) 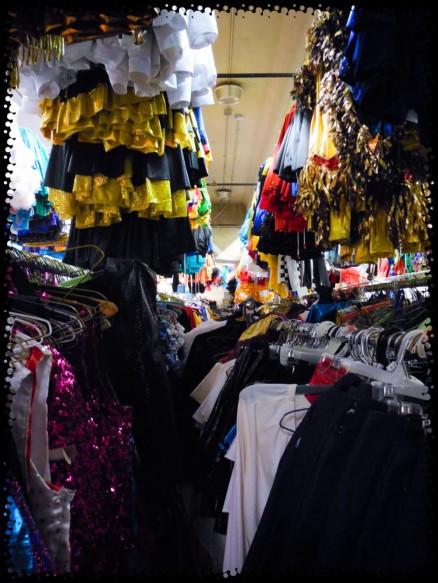 What was that Shakespearean quote? “Alas, poor Yorick! I knew him, Horatio” (Take a closer look down the aisle!)

MORE costumes! (are you counting?)

… and MORE! (are you lost yet?) Here, let me just climb up on this ladder and see what we can see… 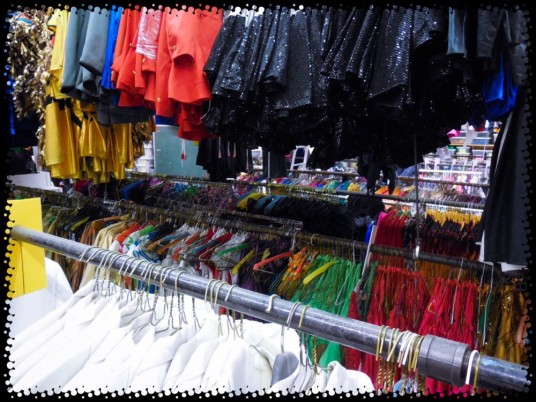 To the left … more costumes… 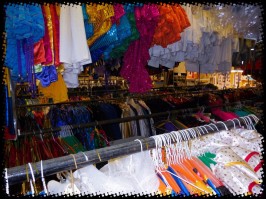 … and to the right … more costumes… 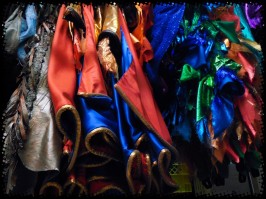 … and right in front of me … more costumes…

… all around us … more costumes! Just think – someone designed, planned, cut, sewed, serged, pressed, fitted, and performed in each and every one!

I could really see this dress dancing on the stage all by itself!

Hmm… this one reminds me of “Dolly”!

This one kind of looks like a guy I knew a long time ago! 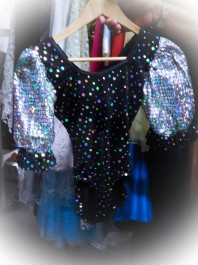 This costume was so tiny, I wonder what age/size it was meant for?

Now that is Elegance! 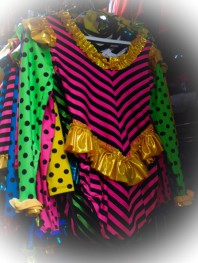 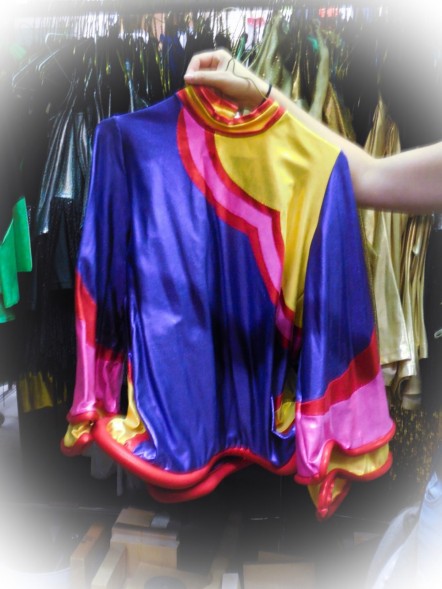 … and, of course, the Cowgirl Look… which of course needs a ….

… Cow Skirt to go with it! I wonder where I could find a sewing pattern for this one?

Hopefully you can tell how excited I was to see all this Imagination and Artistry.  Let’s just say that I have found my “Happy Place” – “The Biggest Sewing Room in Canada” – I think I would like to retire here!

Happy Sewing – especially to the designers and sewists and volunteers at the Calgary Stampede Sewing Room!  Thank you, sincerely, for letting me visit!

* All photos are the property of “Nice dress!  Thanks, I made it!!”  All Imagination and Artistry is the property of the people behind the Calgary Stampede TransAlta Grandstand Show!

** Statistics obtained from Roy Wright and The Young Canadians website.  Thank you!

Follow Nice dress! Thanks, I made it!! on WordPress.com 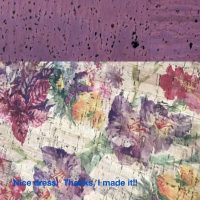 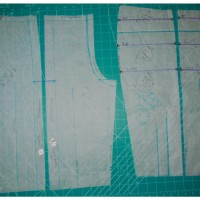 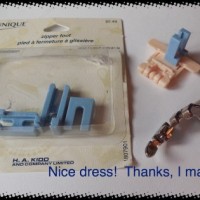 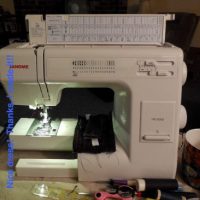 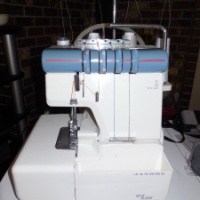 1000 Things to Do with a Sewing Machine (click icon) 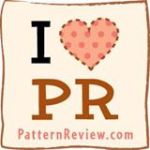